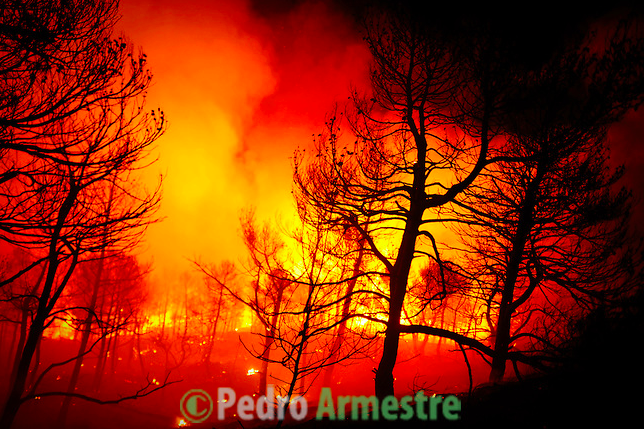 1. Because Internet photos are immediately very old. The photos of the first quarter of the football game go really fast in digital formats, but at halftime those photos are gone, unless there has been something important, like a goal, an expulsion or something meaningful. We have to change our habits.

2. I started working when digital media did not exist. There were print media and magazines. A printed newspaper needed 20 or 25 photos to cover story.

What happens nowadays? A newspaper needs those 25 pictures for the paper, but need to consume 300 photos during the day on the web. I think the only thing that has happened is that we have expanded the range of products. When we got to the catastrophic point “photojournalism has become shit, because you no longer lives …” I try to tell people that if a newspaper before needed 25 photos a day and had 100,000 pesetas to get their 25 photos, it made accounts. But it now has 600 € and needs 350 photos. If you do the math, they have to pay 20 € per photo. It’s that simple. So what can you do? Give value to your photographs. But that does not happen every day because not every day you get the picture.

3. There is an overweight of use by means of photo social networks without contrasting sources. For me, social networks are only means of communication when you follow the official accounts of media or journalists. If not, is the bar where we met before with a coffee or a bottle and you were telling your movie. If you notice, 80% of what’s in social networks is subjective.

4. When I talk about that journalism is not impartial, that I differ a lot. It’s not fair, but we must always keep in mind not to fall into the other extreme, that is to say and think one of the big problems of the profession is that citizens have lost confidence in the media. I understand the plurality of information that has always existed, but from there to just give an opinion …

5. I changed the overnight from analog to digital. We all thought it was going to be a blast and we were jumping all over the developing process, we would send much faster … but then I realized that tum a new tool, which was continuously work with Photoshop. In the long run has generated a torment. Now you come from a 1500 photo information, crazy especially when archiving. At the end you have a welter of hard drives.

6. Before only photographers went pout home with a camera. Now, without realizing everybody carry a camera. Photography, thanks to digital, has been democratized and everyone takes pictures. This affects but, a guy taking a picture does not mean photojournalism. That is the danger of the media, which are echoing issues without prior contrasting. Obviously, the most published the bombing of London in 2012 worldwide photo I think it was a picture taken with a mobile and has a brutal journalistic component. That has happened throughout history in some cases by amateurs. I think it has been missed the critical sense of the editors to compare who is giving the incoming information. It is not the fault of the professional or amateur, if he is interested in something that is living and takes a photography or record it.

8. I know the crisis of photojournalism since I started working.  I believe that photojournalism was bornt in crisis, because the photo is an excuse to plug a hole in a newspaper. Photography was born in a precarious way and not as a profession. When I was studying people said, “You’re crazy, photojournalists are starving.” It has always been precarious, but every time we have degraded it more and more. One reason is that “everyone goes under their own steam“.

9. I don´t mind wether a man, a boy or a girl caught a picture mine of a football game and put it in their social networks because they like Ronaldo. I like it because they are interested in my photo. That just anyone take my picture and put it on their Facebook profile does not bother me at all. The problem is when is a company gets Internet photo, removes the watermark and make a banner with it. This is very common. Nut I have not enough time to make constant search.

10. I think photojournalism is better than ever. There are brutal photojournalists nowadays, because technology has helped us a lot to evolve in the photographic process. You may have advantages and disadvantages, but for me photojournalism is in a “totally awesome” moment. What is missing is the business model. That is the big problem and it needs to change. It’s what we try us, from our humble position in Calamar2. We are a professional entirely different model and would love to grow and create a model based on this medium. We try to give back to others. I’ve got an exhibition in PhotoEspana because you have opened the doors of your house for 3 days. I think we can not forget that we demand much and all you offer is to come out in the media and I think we can offer more. You can either become an NGO because you would not live, but if I know that an organization is working on something that I find interesting and without leaving my pocket I can do a campaign where I get € 4000 and in that town each well worth 1000 €, I know in that village 4 wells have been left by Calamar2. In a way, I return the favor you have done me making my home.